There comes a time in almost every rifle owner’s life when a gun vise becomes a very nice thing to have, if not a necessity. For me it was when I was buying the scope (Leupold VX-3i) for the Remington 700 project.  (BTW, This video by Larry Potterfield of Midway USA is a great tutorial on mounting a riflescope). 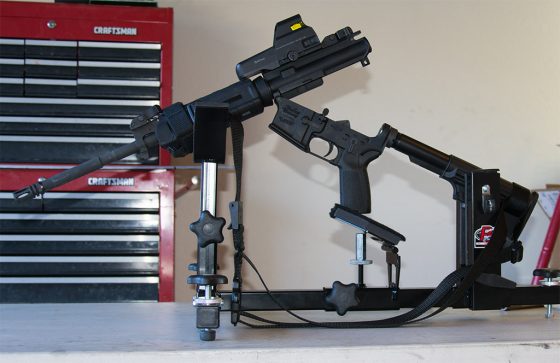 I also wanted a gun vise suitable for cleaning my AR.  I wanted to be able to pull the (rear) takedown pin and let the Upper rotate downward. (See adjacent photo.) I have a 2-point sling on my AR, and when I pull both pins the Upper and Lower are still connected by the sling, resulting in a slightly unwieldy arrangement when trying to clean it without some sort of vise.

The two most popular gun vises on the market are the Tipton and the CTK Precision P3.  I chose the CTK because:

Working on the Remington 700

In the adjacent photo you can see the shooting rest attachment is pushed forward out of the way.  Here, I’m about to give the Remington 700 a good cleaning, but this configuration was perfect for mounting the Leupold VX-3i scope. The yoke at the front of the P3 can be raised and lowered. After raising the yoke to roughly level the rifle, I then used the knobs on the feet to make the final level adjustments.

Here you can see the P3 acting as a shooting rest.  I’ve removed the gun vise attachment. This is a nice easy relaxing way to support the rifle while zeroing the scope

Buy Once, Cry Once

Yes, the P3 is expensive, but let me tell you a story.  My dear departed father grew up on a farm in Ohio. Farmers don’t have much money.  When they need a tool, they go out into the tool shed, find something close, and beat-to-fit.  As a result, I watched my father all his life work on projects – whether it was re-paneling a room or overhauling an engine – using substandard ill-fitting tools. I watched him get angry at his tools and cuss and swear because the tool did not do the job properly.  And I watched as the end product was almost always substandard.  I learned from that. For me, tools need to give me pleasure. (After all I am working on my hobby.)  Good tools mean the end result is one I can be proud of.  Half the job is the right tool.

The CTK Precision P3 is a tool that I will have for the rest of my life, and probably eventually pass on to my son.