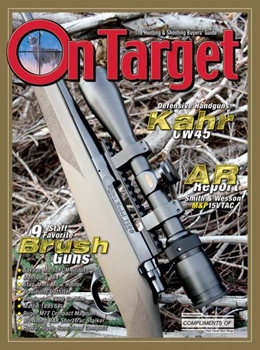 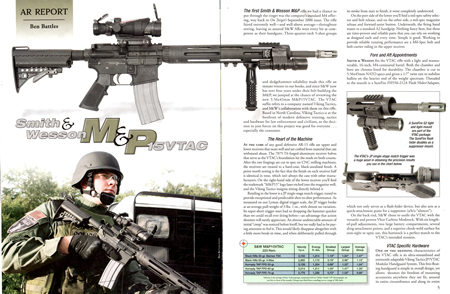 The first Smith & Wesson M&P rifle we had a chance to put through the ringer was the company’s standard M4 offering, way back in On Target’s September 2006 issue.  The rifle faired extremely well – and well-above average – throughout testing, leaving us assured S&W ARs were every bit as competent as their handguns.  Three-quarter-inch 5-shot groups and sledgehammer reliability made this rifle an instant winner in our books, and since S&W now has over four years under their belt building the M&P, we jumped at the chance of reviewing the new 5.56x45mm M&P15VTAC.  The VTAC suffix refers to a company named Viking Tactics, and S&W’s collaboration with them on this rifle.  Based in North Carolina, Viking Tactics is at the forefront of modern defensive training, tactics and hardware for law enforcement and civilians, so the decision to join forces on this project was good for everyone… especially the consumer.

The Heart of the Machine

At the core of any good defensive AR-15 rifle are upper and lower receivers that mate well and are crafted from material that can withstand abuse.  The 7075 T6 forged-aluminum receiver halves that serve as the VTAC’s foundation hit the mark on both counts.  After the raw forgings are cut to spec on CNC milling machines, the receivers are treated to a hard-coat, black-anodized finish.  A point worth noting is the fact that the finish on each receiver half is identical in tone, which isn’t always the case with other manufacturers.  On the right-hand side of the lower receiver you’ll find the trademark “M&P15” logo laser-etched into the magazine well, and the Viking Tactics insignia sitting directly behind it.

Residing in the lower is a JP single-stage match trigger, tuned to provide exceptional and predictable shot-to-shot performance.  As measured on our Lyman digital trigger scale, the JP trigger broke at an average pull-weight of 3 lbs. 1 oz., with almost no variation.  Its super-short trigger reset had us dropping the hammer quicker than we could recall ever doing before – an advantage that action shooters will surely appreciate.  An almost undetectable amount of initial “creep” was noticed before letoff, but we really had to be paying attention to feel it.  This would likely disappear altogether with a little more break-in time, and when deliberately pulled through its stroke from start to finish, it went completely undetected.

On the port side of the lower you’ll find a mil-spec safety selector and bolt release, and on the other side, a mil-spec magazine release and forward-assist button.  Underneath, the firing hand mates to a standard A2 handgrip.  Nothing fancy here, but these are time-proven and reliable parts that you can rely on working as designed each and every time.  Simple is good.  Working to provide reliable running performance are a Mil-Spec bolt and bolt-carrier riding in the upper receiver.

Smith & Wesson fits the VTAC rifle with a light and maneuverable, 16-inch, M4-contoured barrel.  Both the chamber and bore are chrome-lined for durability.    The chamber is cut to 5.56x45mm NATO specs and given a 1:7” twist rate to stabilize bullets on the heavier end of the weight spectrum.  Threaded to the muzzle is a SureFire FH556-212A Flash Hider/Adapter, which not only serves as a flash-hider device, but also acts as a quick-attachment point for a suppressor (a/k/a “silencer”).

On the back end, S&W chose to outfit the VTAC with the versatile and proven Vltor Carbine Modstock.  With six length-of-pull adjustments, two large batter compartments, several sling-attachment points, and a superior cheek-weld surface for iron-sight or optic use, this buttstock is a perfect match to the VTAC’s intended mission.

One of the defining characteristics of the VTAC rifle is its ultra-streamlined and eminently adaptable Viking Tactics JP/VTAC Modular Handguard System.  This free-floating handguard is simple in overall design, yet allows shooters the freedom of mounting accessories anywhere they see fit, around its entire circumference and along its entire length.  Picatinny strips are supplied for this purpose, and index with and tension to the handguard’s oval-shaped slots.  Its beauty lies in its ability to be easily and quickly customized to the mission at hand, while creating a superior gripping surface devoid of hand-chewing and weight-adding integral Picatinny rails.  The handguard is also significantly lighter than the typical 4-way Picatinny handguard, and contributes in no small part to the rifle’s handy 6.5-pound empty weight.  The handguard’s vented slots and rough-textured finish serve to ad traction to the support hand when a forward grip is not employed.  S&W ships the VTAC complete with a SureFire G2 hand-held light that can be affixed to the handguard with the supplied VTAC Light Mount.  Several strips of rail – including a shallow strip used for mounting a detachable front sight – along with a sling-swivel stud attachment and a VTAC padded two-point sling are included as part of the package.

Sticking to our normal testing routine, we loaded up as many 30-round mags as we could find kicking around, mounted a Trijicon 4×32 RCO ACOG fiber-optic/tritium battle sight, and headed to our favorite proving grounds for some fast-paced steel target work.  How a rifle fairs here is our best indication of its reliability, and with the 300-plus rounds we put through the VTAC in less than a half-hour – without a single malfunction or hint thereof – we’re confident in labeling this rifle as “duty ready.”  Our only complaint with the VTAC is its lack of any iron-sight system from the factory, but this deficiency is easily rectified through the aftermarket.

Stepping up to the plate at 100 yards, we gave the bore a quick cleaning, and removed the ACOG to mount Trijicon’s new 5-20x50mm AccuPoint riflescope to bring targets up close and personal.  Our very first five-shot group, fired with Hornady’s 75-grain TAP FPD load, gave us a good indication of the rifle’s potential.  This group measured a scant 0.89-inches from center to center, and even better yet, this same load printed another “best of the day” group measuring 0.72 inches shortly thereafter.  The “way-better than your average Mil-Spec Trigger” played a large role in these results.

The VTAC is a competent tool for seasoned professionals, and a helluva nice option for the individual looking for the ultimate in defensive carbines.  See it at your dealer ($2,196), or contact Smith & Wesson; Tel.: (800) 331-0852; Web www.smith-wesson.com

Caption 1:
A surefire G2 light and light-mount are part of the VTAC package.  The SureFire flash hider doubles as a suppressor mount.

The VTAC’s JP single-stage match trigger was a huge asset in obtaining the precision results you see in the chart below.

*Although this article was a review of the S&W M&P15VTAC, and the P3 Mono Grip was not mentioned, it was used on the rifle during testing.  See first photo.