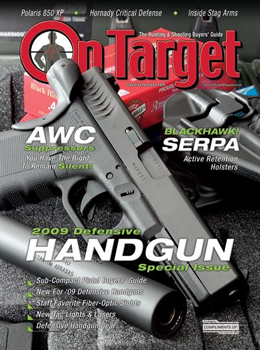 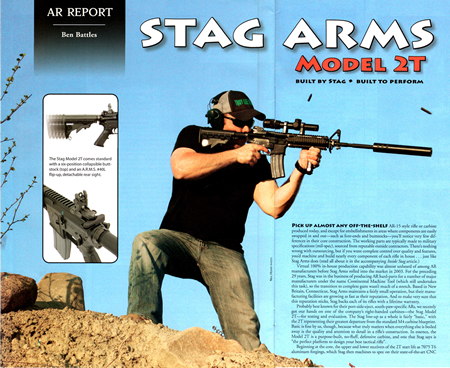 PICK UP ALMOST ANY OFF-THE-SHELF AR-15 style rifle or carbine produced today, and except for embellishments in areas where components are easily swapped in and out – such as fore-ends and buttstocks – you’ll notice very few differences in their core construction.  The working parts are typically made to military specifications (mil-spec), sourced from reputable outside contractors.  There’s nothing wrong with outsourcing, but if you want complete control over quality and features, you’d machine and build nearly every component of each rifle in house… just like Stag Arms does (read all about it in the accompanying Inside Stag article.)

Virtual 100% in-house production capability was almost unheard of among AR manufacturers before Stag Arms rolled into the market in 2003.  For the preceding 29 years, Stag was in the business of producing AR hard-parts for a number of major manufacturers under the name Continental Machine Tool (which still undertakes this task), so the transition to complete guns wasn’t much of a stretch.  Based in New Britain, Connecticut, Stag Arms maintains a fairly small operation, but their manufacturing facilities are growing as fast as their reputation.  And to make very sure that this reputation sticks, Stag backs each of its rifles with a lifetime warranty.

Probably best known for their port-side-eject, south-paw-specific ARs, we recently got our hands on one of the company’s right-handed carbines – the Stag Model 2T – for testing and evaluation.  The Stag line-up as a whole is fairly “basic,” with the 2T representing their greatest departure from the standard M4 carbine blueprint.  Basic is fine by us, though, because what truly matters when everything else is boiled away is the quality and attention to detail in a rifle’s construction.  In essence, the Model 2T is a purpose-built, no-fluff, defensive carbine, and one that Stag says is “the perfect platform to design your best tactical rifle”.

Beginning at the core, the upper and lower receivers of the 2T start life as 7075 T6 aluminum forgings, which Stag then machines to spec on their state-of-the-art CNC centers.  Fitted to the lower receiver are standard mil-spec controls, including the safety selector, magazine release and bolt release, as well as a mil-spec trigger group.  Mil-spec triggers can run the gamut from “really crappy” (lots of creep, stacking and poundage), to “pretty decent” (not much creep, maybe a bit of stacking, and a somewhat lighter pull weight).  The trigger on our sample rifle obviously benefited from in-house quality control, as it was easily the nicest mil-spec trigger we’ve pulled through to date.  Although it still exhibited the typical heavy pull weight associated with these triggers, there was zero creep or stacking, and it’s break was 100% predictable shot to shot. 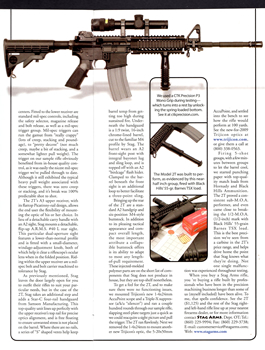 The 2T’s A3 upper receiver, with its flattop Picatinny-rail design, allows the end user the flexibility of mounting the optic of his or her choice.  In lieu of a detachable carry handle with an A2 sight, Stag mounts a detachable, flip-up A.R.M.S #40 L rear sight.  This particular dual-aperture sight features a lower-than-normal profile and is fitted with a small-diameter, windage-adjustment knob, both of which help it clear a riflescope’s ocular lens when in the folded position.  Riding within the upper receiver are a mil-spec bolt and bolt carrier machined to tolerance by Stag.

As previously mentioned, Stag leaves the door largely open for you to outfit their rifles to suit your particular needs, but in the case of the 2T, Stag takes an additional step and adds a Star-C four-rail handguard from Samson Manufacturing.  This top-quality unit lines up perfectly with the upper receiver’s top rail for precise optics alignment, and is free floating to ensure unwanted stress is not placed on the barrel.  Where there are no rails, a series of “S” shaped vents help keep barrel temp from getting too high during sustained fire.  Underneath the handguard is a 1:9 twist, 16-inch chrome-lined barrel, cut to the familiar M4 profile by Stag.  The barrel wears an A2 front-sight post with integral bayonet lug and sling loop, and is topped off with an A2 “birdcage” flash hider.  Clamped to the barrel beneath the front sight is an additional loop to better facilitate a three-point sling.

Bringing up the rear of the 2T are a standard A2 handgrip and six-position M4-style buttstock.  In addition to its pleasing tactical appearance and compact overall length, the most important attribute a collapsible buttstock offers is its ability to adapt to most any length-of-pull requirement.  These injected-molded polymer parts are on the short list of components that Stag does not produce in house, but they are top-shelf nonetheless.

To get a feel for the 2T, and to make sure there were no functioning issues, we mounted Trijicon’s new 1-4x24mm AccuPoint scope and a Triple-X suppressor (a/k/a “silencer”) and ran a couple hundred rounds through our sample rifle, slapping steel-plate targets just as quick as we could reacquire a sight picture and pull the trigger.  The 2T ran flawlessly.  Next we removed the 1-4x24mm to mount another new Trijicon’s optic, the 5-20x50mm AccuPoint, and settled into the bench to see how the rifle would perform at 100 yards.  See the new-for-2009 Trijicon optics at www.trijicon.com, or give them a call at (800) 338-0563.

Firing 5-shot groups, with a few minutes between groups to let the barrel cool, we started punching paper with top-quality match loads from Hornady and Black Hills Ammunition.  The 2T proved a consistent sub-M.O.A. (1/2-inch) mark with Black Hills’ 55-grain Barnes TSX load.  This is the best precision we’ve seen from a carbine in the 2T’s price range, and helps drive home the point that Stag knows what they’re doing.  Not one single malfunction was experienced throughout testing.

When you buy a Stag Arms rifle, you’re buying a rifle built by professionals who have been in the precision machining business longer than some of us (myself included) have been alive.  To me, that spells confidence.  See the 2T ($1,125) and the rest of the Stag right and left-hand rifle line up at your nearest firearms dealer, or for more information contact STAG ARMS, Dept. OT: Tel.: (860) 229-9994; Fax: (860) 229-3738; E-mail: customerservice@stagarms.com; Web: www.stagarms.com

Image Caption 2:
We used a CTK Precision P3 Mono Grip during testing – which turns into a rest by unlocking the spring-loaded bottom.  See it at ctkprecision.com.

Image Caption 3:
The Model 2T was built to perform, as evidenced by this near half inch group, fired with Black Hills’ 55-gr. Barnes TSX load.