Why the CTK Precision rifle rest works so well

Several readers have inquired about what rifle rest I use. The rest often is seen in photos that accompany my articles.

The rest itself I received from a young entrepreneur named Curt Knitt. I have had it so long I cannot remember when it was put on my shooting bench. I even take it to the range because I am so accustomed to its feel. 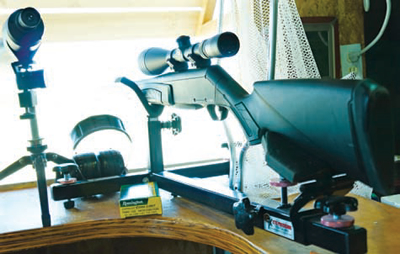 The rest and catcher are on John Johnston’s bench after a shooting session.

As you look at the photo you can see the front yoke, where the forearm sits, is adjustable for height by lifting it to the desired height and locking it there with the knob on the right side.

There have been a few rifles that did not fit the “V” yoke, such as an old Winchester I have with a custom 1960s beavertail stock. The forearm is too wide. Also, some AR-type rifles have a hard time fitting in the rest, but it can be done.

What makes this rest so accurate are the levels on all three ends, the adjustability of the front yoke and the rear rest.

To adjust the rifle up or down you can slide the rifle forward or to the rear. The rear rest also has a tilt adjust for fine adjustments. It is also split down the middle so sling studs do not hit the rest.

You can move the rear rest forward or backward to meet your needs. In fact, you can adjust the rear rest til it’s almost flat, slide it forward, and use it for a pistol rest. Curt has since made a special front rest just for pistols.

Have you ever been at the range and suddenly got hit by a very hot empty case that came from the person to your left who has a semi-auto rifle? Or have you had to stop shooting so people could collect brass that ended up in front of the firing line? Curt developed a nice brass catcher that does not even touch the rifle or pistol.

I got one when I was reviewing a Browning BAR. It was great not to have to search for brass in my shop. I just hate to lose brass, not even one, especially the wildcat cases.

I leave the catcher on my shooting bench even when I am shooting my bolt actions. I just run the bolt as usual. At the end of the session all the brass is in one place. With the cost of brass, this catcher does not take long to pay for itself.

The only rifle I saw that it would not work on completely was a M1 Garand a friend was shooting. That rifle would send empties every which way.

Curt has developed an option that allows the catcher to be attached to a tripod for pistol shooters.

The next thing he makes is a clamp-on vise that turns this rest into a good rifle vise in seconds for cleaning, scope installation and sighting in a scope.

I do not use this vise much because I have a separate vise for these purposes. It did come in handy sighting in a tall scope with a laser. If you do not have a vise, get this attachment, and you should have all you need.

Curt also sent a level for use when installing a scope. It works well, but nothing I have found works on every rifle. I just have a tackle box full of scope-mounting tools.

I would like to see a flat, padded rest as an option for the V forearm rest. Since I am not a competitive shooter, I do not know if the rest as it is now can be used in different competitions. It is far better than the 4”x4” with the cutoff blue-jean leg filled with sand that I started with many years ago.

I admire this young entrepreneur for making the things shooters really need. His company is not a giant, but to me this is a great example of the American way.